Become a Meal Planning Pro
Get weekly tips and recipes plus a free copy of my ebook and meal plan!
1036shares
Jump to Recipe

Passed down for generations, Cinnamon Apple Noodle Kugel is a sweet and comforting side dish the whole family loves, especially with my healthier twists! 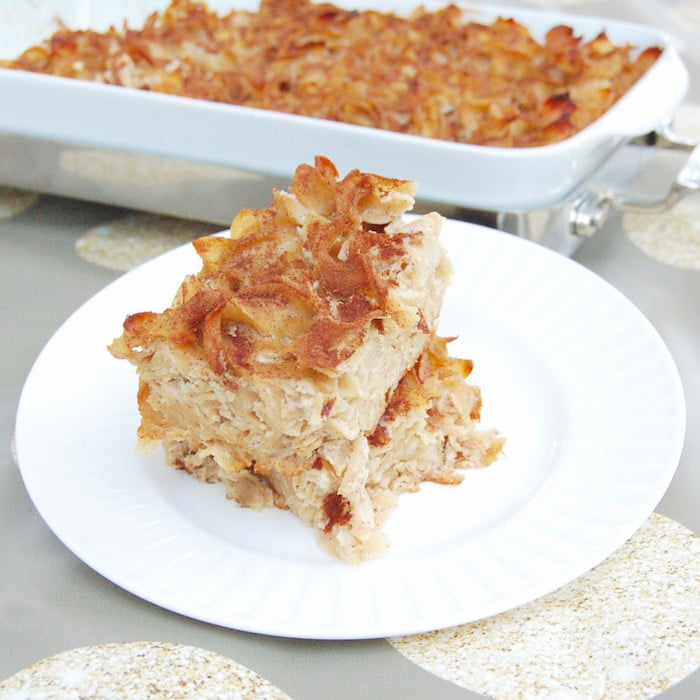 It should come as no surprise to anyone who has followed me here that I love to cook, but when people ask me about my first cooking memories I’m honestly stumped.

I don’t really remember when I fell in love with cooking, but I do remember spending a lot of time in the kitchen with my mother when I was growing up. Most of that time was spent setting and clearing the table and helping dry the dishes, but we would sing and chat all the while so it was always fun and never felt like a chore.

I never really helped my mother cook, but I definitely watched and admired her ability to make huge pots of chicken soup, trays of stuffed cabbage, and the biggest roast turkey I’ve ever seen. And no one makes meatballs the way my mom does – they are so soft and tender without any dairy and since we keep kosher they also have no pork.

Needless to say, I always thought my mom was a great cook, and to this day there is nothing like the aroma in my parents’ house when they’re hosting a holiday meal or even just cooking up a traditional Shabbat (Friday night) dinner. 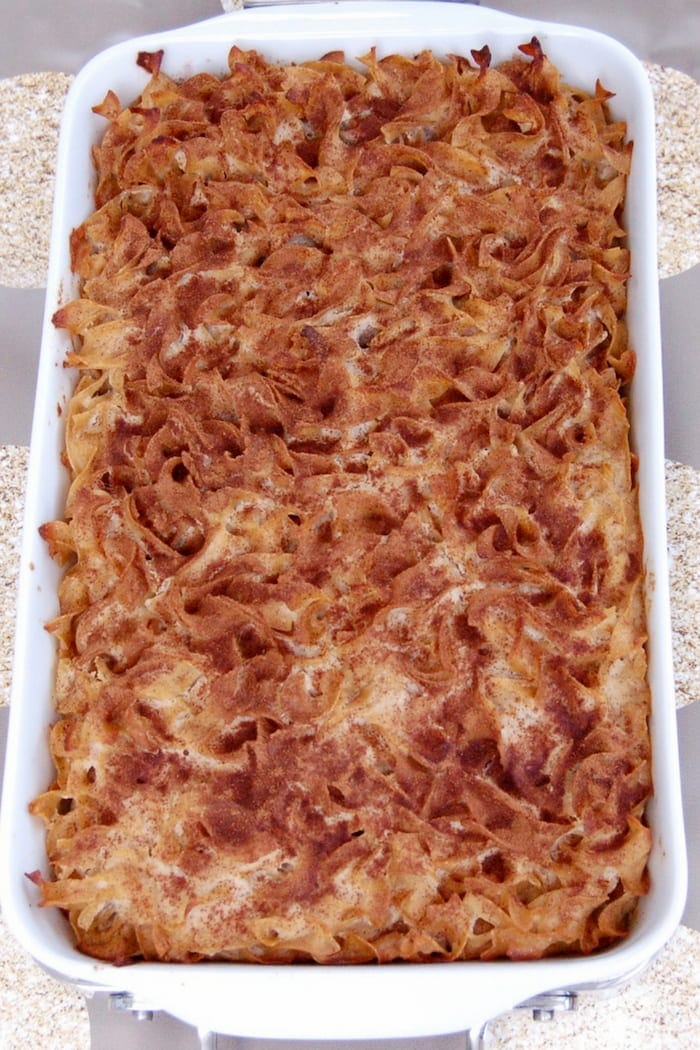 That said, my mother doesn’t veer too much from traditional Jewish food, which isn’t always the healthiest, so it’s not too often that I make the classic recipes she would cook up. And when I do, have no doubt I will make some changes to healthify them just a bit.

With Rosh Hashana, the Jewish new year, right around the corner, it was time for me to make over one of the classic recipes my mother always has on the table for this holiday (and many others). The original recipe for this Cinnamon Apple Noodle Kugel has been in my family for many years – my mother’s mother, who I called Bubby, passed it down to my mother who passed it down to me and actually included it in my bridal shower recipe book in honor of my Bubby (see below).

I absolutely love the original version of this noodle kugel – I can eat piece after piece of it –  but it’s not the healthiest recipe, and once I saw what actually went in it I knew there was room for improvement. And so, off I went to the kitchen to tweak it and make it just a little more nutritious while making sure it was still delicious.

The new and improved version that I feed my family is definitely not as sweet as the original, but it is sweet enough and it’s higher in fiber too. If you look at the nutrition facts for the new recipe and the original (see the recipe below), you can see that my makeover has about 30% fewer calories, 40% less fat, 65% less saturated fat, 45% less sugar, and 50% more fiber than the original.

Here are the changes I made that account for all those nutritional differences:

Something I kept the same: Letting the top layer of noodles and the corner pieces get crispy! I’ve been known to pick a crunchy noodle off the top of my mom’s kugel if I’m there when it comes out of the oven piping hot. I may or may not also eat a whole corner piece before it’s served. I’m telling you, this is a recipe that memories are made of! 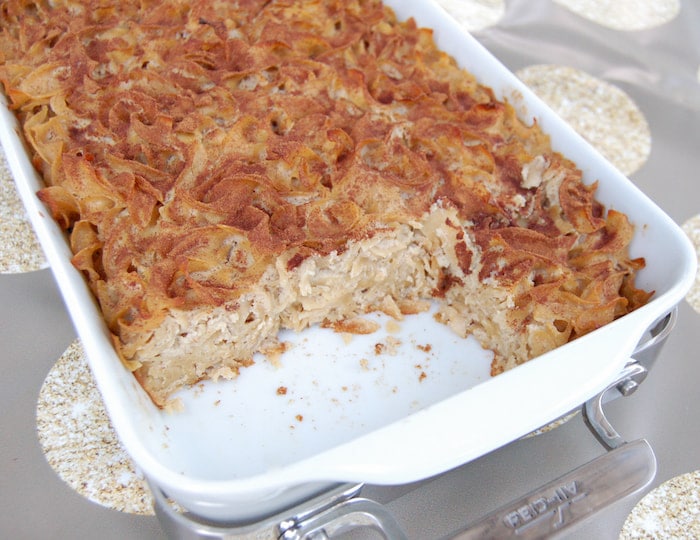 If you’re not familiar with noodle kugel you may have heard of noodle pudding or noodle casserole. They’re pretty much the same thing, but Kugel is the Eastern European word for this Jewish dish.

What’s different about most noodle kugels compared to most noodle casseroles and puddings is that kugel tends to be dairy-free, so you won’t find cottage cheese, ricotta, butter, or milk in my recipe, whereas you may in some others (for example, my friend Robin’s Noodle Kugel/Noodle Pudding). It actually irks me that my husband calls it noodle pudding, because this is not pudding!

Ok, enough about semantics, let’s get to the recipe!

Yield: 12 Serving Size: 12 -15
Amount Per Serving: Calories: 180
Nutrition information was calculated by Nutritionix. It may not be 100% accurate.

Have you ever had cinnamon apple noodle kugel before?

What are some of your first cooking recollections? 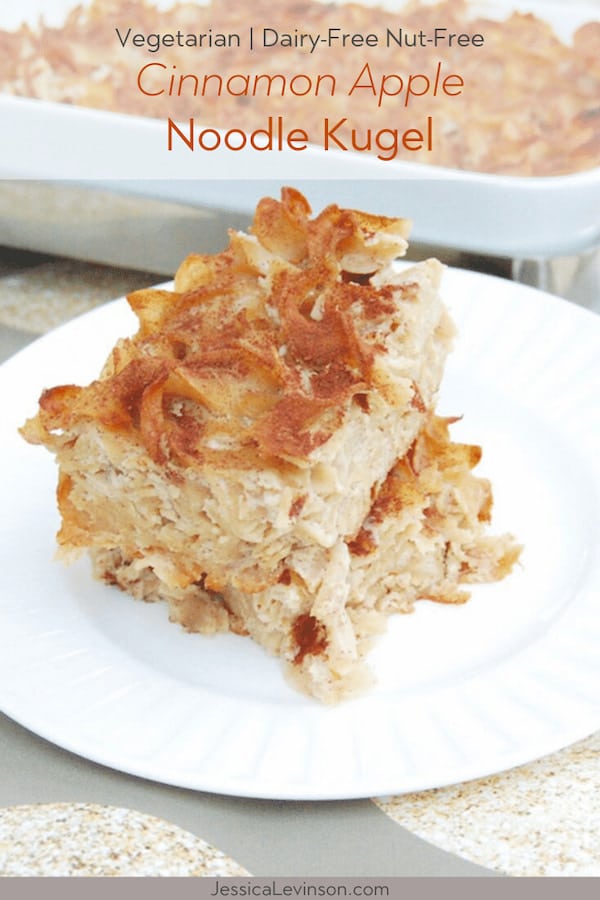