Close
Become a Meal Planning Pro
Get weekly tips and recipes plus a free copy of my ebook and meal plan!
0 shares

A couple of weeks ago I wrote about the possibility of a junk food tax being passed.  As I mentioned then, this idea has been toyed with for a long time, so it’s no surprise that New York State has put it on hold yet again.  That said, the New York City Department of Health and Mental Hygiene, is making new efforts in the fight against fat. Just yesterday they launched a new ad campaign that says “Are you pouring on the pounds? Don’t drink yourself fat. Cut back on soda and other sugary beverages. Go with water, seltzer or low-fat milk instead.” The ad, below, shows soda (and other similar ads show energy drinks and iced tea) turning into fat globules as it reaches the glass, the point of which is to show people the effect drinking sugary drinks has on the body. 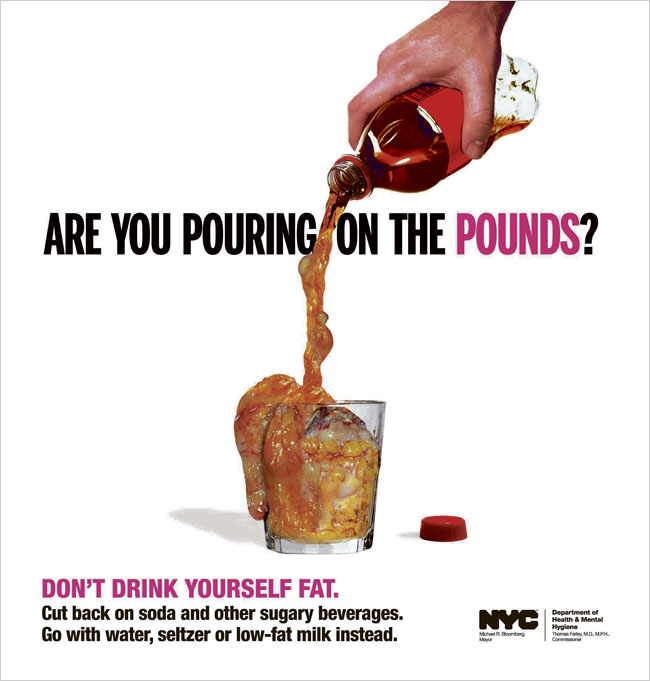 Just last week there was news that the American Heart Association found that the average American consumes 22 tablespoons of sugar per day — that’s 367 extra calories per day! It’s no wonder that obesity rates are rising and we take in more sugar. Just look at the difference in portion sizes over the years.  Twenty years ago a bottle of soda was 6.5 ounces, or 82 calories and about 6 teaspoons of sugar, whereas these days a bottle of soda is 20 ounces, or 250 calories and about 16.5 teaspoons of sugar.You can see what a big size difference this is:

Of course the Nutrition Facts on a 20 oz bottle show that the serving size is 8 oz and there are 2 1/2 servings per container, but how many people split a bottle that appears to be single serve? Not many that I know.

Back to the new ad campaign, I think it can certainly make an impact, assuming people understand what the ad is showing. But of course the ad alone won’t help people make changes. Motivation, personal responsibility, and nutrition education will.

What do you think about the new ad?